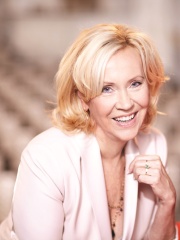 Agneta Åse Fältskog (born 5 April 1950), known as Agnetha Fältskog (Swedish pronunciation: [aŋˈnêːta ˈfɛ̂ltskuːɡ] (listen)), is a Swedish singer, songwriter, musician and actress. She first achieved success in Sweden with the release of her 1968 self-titled debut album, and later achieved international stardom in the 1970s as a member of the pop group ABBA. The group has sold over 180 million albums and singles worldwide, making it one of the best-selling music acts in history.After the unofficial break-up of ABBA in 1982, Fältskog found renewed success later in the decade as a solo artist with three albums and a leading role in a movie. She became reclusive in the 1990s, avoiding outside publicity and residing on the Stockholm County island of Ekerö.Fältskog stopped recording music for 16 years until she released a new album, My Colouring Book, in 2004. Read more on Wikipedia

Agnetha Fältskog is most famous for being the lead singer of the Swedish pop group ABBA.