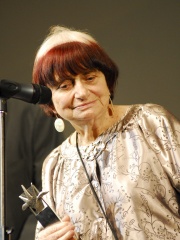 Agnès Varda (French: [aɲɛs vaʁda]; born Arlette Varda, 30 May 1928 – 29 March 2019) was a Belgian-born French film director, screenwriter, photographer, and artist. Her pioneering work was central to the development of the widely influential French New Wave film movement of the 1950s and 1960s. Her films focused on achieving documentary realism, addressing women's issues, and other social commentary, with a distinctive experimental style.Varda's work employed location shooting in an era when the limitations of sound technology made it easier and more common to film indoors, with constructed sets and painted backdrops of landscapes, rather than outdoors, on location. Read more on Wikipedia

Agnès Varda is most famous for her work as a French filmmaker. Her most notable films include Cleo from 5 to 7, Vagabond, and The Gleaners and I.

Among FILM DIRECTORS In Belgium