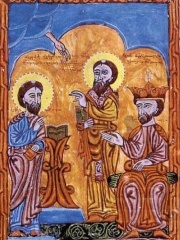 Agathangelos (in Old Armenian: Ագաթանգեղոս Agatʿangełos, in Greek Ἀγαθάγγελος "bearer of good news" or angel, c. 5th century AD ) is the pseudonym of the author of a life of the first apostle of Armenia, Gregory the Illuminator, who died about 332.He claims to be a secretary of Tiridates III, King of Armenia in the early 4th century, but the life was not written before the 5th century. It purports to exhibit the deeds and discourses of Gregory, and has reached us in Armenian, Greek, Georgian, Syriac, Ethiopic, Latin and Arabic. Read more on Wikipedia

Page views of Agathangelos by language

Among people born in 500, Agathangelos ranks 37. Before him are Ælle of Sussex, Ardaric, Tato, Theodoric Strabo, Clotilde, and Skandagupta. After him are Peter the Patrician, Kaleb of Axum, Aedesia, Eutharic, Leontius, and Vitalian. Among people deceased in 600, Agathangelos ranks 13. Before him are Priscian, Leander of Seville, Hrólfr Kraki, Bharavi, Eutocius of Ascalon, and John the Lydian. After him are David the Invincible, Theodorus Lector, Hesychius of Miletus, Icel of Mercia, Aneirin, and Vistahm.