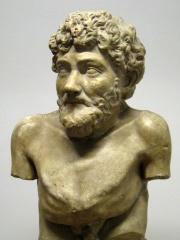 Aesop ( EE-sop or AY-sop; Greek: Αἴσωπος, Aísopos; c. 620–564 BCE) was a Greek fabulist and storyteller credited with a number of fables now collectively known as Aesop's Fables. Although his existence remains unclear and no writings by him survive, numerous tales credited to him were gathered across the centuries and in many languages in a storytelling tradition that continues to this day. Read more on Wikipedia

Since 2007, the English Wikipedia page of Aesop has received more than 2,198,748 page views. His biography is available in 92 different languages on Wikipedia (up from 90 in 2019). Aesop is the 21st most popular writer (down from 20th in 2019), the most popular biography from Bulgaria and the most popular Bulgarian Writer.

Aesop is most famous for his fables, which are short stories about animals that teach a moral lesson.

Page views of Aesops by language

Among writers, Aesop ranks 21 out of 5,794. Before him are Honoré de Balzac, Albert Camus, Sophocles, Virgil, Petrarch, and Jean-Paul Sartre. After him are Anton Chekhov, Alexander Pushkin, Giovanni Boccaccio, Agatha Christie, Ovid, and Antoine de Saint-Exupéry.

Others Deceased in 564 BC

Among WRITERS In Bulgaria