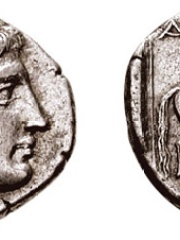 Aeropus II of Macedon (Ancient Greek: Ἀέροπος, romanized: Aéropos), king of Macedonia, son of Perdiccas II, was guardian during the minority of his king and kinsman, Orestes, with whom he reigned for some years after 399 BC.The first four years of this time he reigned jointly with Orestes, whom he murdered, and the remainder alone. After his death by illness, he was eventually succeeded by his son Pausanias. Read more on Wikipedia

Page views of Aeropus II of Macedons by language

Others Deceased in 393 BC