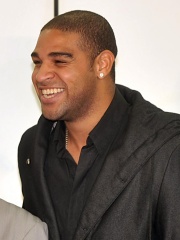 Adriano Leite Ribeiro (born February 17, 1982), commonly known simply as Adriano, is a Brazilian former professional footballer. A powerful striker known for his long range left footed strikes, Adriano's career was however marked by inconsistency. One of the best strikers in the world in the mid 2000s, he had five prolific seasons in Italy with Parma and Inter Milan, earning the nickname L'Imperatore (the Emperor), before a decline in his performances which coincided with the death of his father. Read more on Wikipedia

Since 2007, the English Wikipedia page of Adriano has received more than 93,299 page views. His biography is available in 51 different languages on Wikipedia making him the 470th most popular soccer player.

Page views of Adrianos by language