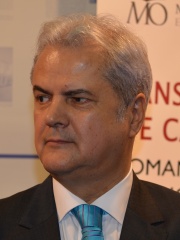 Adrian Năstase (Romanian pronunciation: [adriˈan nəsˈtase]; born 22 June 1950) is a Romanian former politician who was the Prime Minister of Romania from December 2000 to December 2004. He competed in the 2004 presidential election as the Social Democratic Party (PSD) candidate, but was defeated by centre-right Justice and Truth (DA) Alliance candidate Traian Băsescu. He was the President of the Chamber of Deputies from 21 December 2004 until 15 March 2006, when he resigned due to corruption charges. Read more on Wikipedia

Since 2007, the English Wikipedia page of Adrian Năstase has received more than 73,543 page views. His biography is available in 37 different languages on Wikipedia making him the 31st most popular lawyer.

Among LAWYERS In Romania