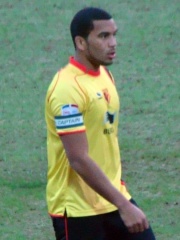 Adrian Joseph Mariappa (born 3 October 1986) is a professional footballer who most recently played as a defender for EFL Championship club Watford. He progressed through Watford's youth academy, and started playing for the first team in the 2005–06 season. Although primarily a centre back, he spent some of his early professional career at right back due to competition for places in the middle. Read more on Wikipedia

Since 2007, the English Wikipedia page of Adrian Mariappa has received more than 457,819 page views. His biography is available in 25 different languages on Wikipedia making him the 10,965th most popular soccer player.