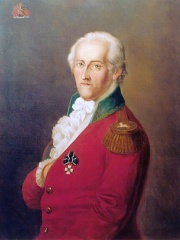 Freiherr Adolph Franz Friedrich Ludwig Knigge (16 October 1752 – 6 May 1796) was a German writer, Freemason, and a leading member of the Order of the Illuminati. Knigge was born in Bredenbeck (now a part of Wennigsen, Lower Saxony) in the Electorate of Hanover as a member of the lesser nobility. When he was barely eleven, his mother died, and when his father died three years later the teenager inherited a large debt. Read more on Wikipedia

Since 2007, the English Wikipedia page of Adolph Freiherr Knigge has received more than 146,430 page views. His biography is available in 23 different languages on Wikipedia making him the 1,594th most popular writer.

Among writers, Adolph Freiherr Knigge ranks 1,592 out of 4,883. Before him are Margherita Sarfatti, Pacuvius, Wolfgang Borchert, Jacint Verdaguer, Jacques Cazotte, and Abu Tammam. After him are Pierre Reverdy, Diagoras of Melos, Carolyne zu Sayn-Wittgenstein, Ibn al-Khatib, Brian Aldiss, and Xenophon of Ephesus.