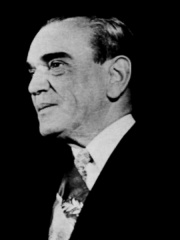 Adolfo Tomás Ruiz Cortines (Spanish pronunciation: [aˈðolfo ˈrwis koɾˈtines] (listen); December 30, 1889 – December 3, 1973) was a Mexican politician who served as 54th President of Mexico from 1952 to 1958, after winning the disputed 1952 elections as the candidate of the ruling Institutional Revolutionary Party (PRI). Unlike both his predecessor Miguel Alemán and his successor Adolfo López Mateos, he was a veteran of the Mexican Revolution (and was the last Mexican president to have been so). Read more on Wikipedia

Among politicians, Adolfo Ruiz Cortines ranks 7,882 out of 15,710. Before him are Leopold IV, Prince of Lippe, Michael Szilágyi, Mas'ud I of Ghazni, Rafael Eitan, Walter V, Count of Brienne, and Władysław III Spindleshanks. After him are Charles Christian, Prince of Nassau-Weilburg, Karl Gützlaff, Arnulf II, Count of Flanders, Pēteris Stučka, Franz Schlegelberger, and Grace O'Malley.