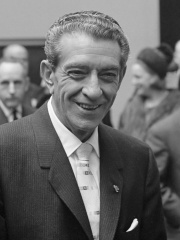 Adolfo López Mateos (Spanish pronunciation: [aˈðolfo ˈlopes maˈteos] (listen); 26 May 1909 – 22 September 1969) was a Mexican politician who became a member of the Institutional Revolutionary Party (PRI), after earlier opposing its precursor in 1929. He was elected President of Mexico, serving from 1958 to 1964. As president, he nationalized electric companies, created the National Commission for Free Textbooks (1959), settled the Chamizal dispute, and opened important museums such as the Museum of Natural History and the National Museum of Anthropology in Mexico City. Read more on Wikipedia

Since 2007, the English Wikipedia page of Adolfo López Mateos has received more than 211,273 page views. His biography is available in 31 different languages on Wikipedia making him the 7,013th most popular politician.