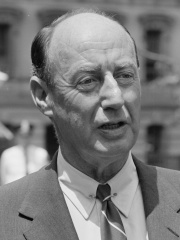 Adlai Ewing Stevenson II (; February 5, 1900 – July 14, 1965) was an American lawyer, politician, and diplomat. Raised in Bloomington, Illinois, Stevenson was a member of the Democratic Party. He served in numerous positions in the federal government during the 1930s and 1940s, including the Agricultural Adjustment Administration, Federal Alcohol Administration, Department of the Navy, and the State Department. In 1945, he served on the committee that created the United Nations, and he was a member of the initial U.S. delegations to the UN. Read more on Wikipedia

Since 2007, the English Wikipedia page of Adlai Stevenson II has received more than 1,810,150 page views. His biography is available in 32 different languages on Wikipedia making him the 43rd most popular diplomat.

Among diplomats, Adlai Stevenson II ranks 44 out of 44. Before him are Roger Casement, Damião de Góis, Jean Kennedy Smith, Ralph Bunche, Richard Holbrooke, and J. Christopher Stevens. After him are Edward M. House.

Among DIPLOMATS In United States