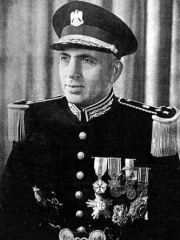 Since 2007, the English Wikipedia page of Adib Shishakli has received more than 98,871 page views. His biography is available in 17 different languages on Wikipedia making him the 8,803rd most popular politician.

Among politicians, Adib Shishakli ranks 8,757 out of 14,801. Before him are Jay Rockefeller, Francesc Cambó, Anne Lister, Histiaeus, Ashur-bel-kala, and Albert II, Duke of Bavaria. After him are Mahendra of Nepal, Princess Augusta Sophia of the United Kingdom, Dámaso Berenguer, Jakaya Kikwete, Taur Matan Ruak, and Jiong of Xia.