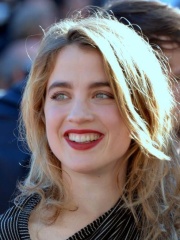 Adèle Haenel (French: [adɛl enɛl]; born 11 February 1989) is a French actress. She is the recipient of several accolades, including two César Awards from seven nominations and one Lumières Award from two nominations. Haenel began her career as a child actress, making her film debut with Les Diables (2002) at the age of 12, and quickly rose to prominence in the French entertainment industry as a teenager. Read more on Wikipedia

Since 2007, the English Wikipedia page of Adèle Haenel has received more than 904,806 page views. Her biography is available in 21 different languages on Wikipedia making her the 7,058th most popular actor.

Among actors, Adèle Haenel ranks 6,972 out of 8,832. Before her are Nicola Walker, Randy Harrison, Lily Cole, André Holland, Steven Mackintosh, and Kelly Blatz. After her are Sara Paxton, Stéphanie Szostak, Natacha Régnier, Valerie Bertinelli, Jodhi May, and Kathryn Prescott.