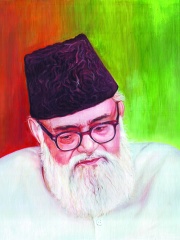 Abul A'la Al-Maududi (Urdu: ابو الاعلی مودودی‎, Abul Alā Al-Mawdūdī – alternative spellings of last name Maudoodi, Mawdudi; (1903-09-25)25 September 1903 – (1979-09-22)22 September 1979) was an Islamic scholar, Islamist ideologue, Muslim philosopher, jurist, historian, journalist, activist and scholar active in British India and later, following the partition, in Pakistan. Described by Wilfred Cantwell Smith as "the most systematic thinker of modern Islam”, his numerous works, which "covered a range of disciplines such as Qur’anic exegesis, hadith, law, philosophy and history", were written in Urdu, but then translated into English, Arabic, Hindi, Bengali, Tamil, Telugu, Kannada, Burmese, Malayalam and many other languages. He sought to revive Islam, and to propagate what he understood to be "true Islam". Read more on Wikipedia