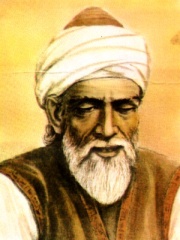 Abū al-Wafāʾ, Muḥammad ibn Muḥammad ibn Yaḥyā ibn Ismāʿīl ibn al-ʿAbbās al-Būzjānī or Abū al-Wafā Būzhjānī (Persian: ابوالوفا بوزجانی or بوژگانی‎) (10 June 940 – 15 July 998) was a Persian mathematician and astronomer who worked in Baghdad. He made important innovations in spherical trigonometry, and his work on arithmetics for businessmen contains the first instance of using negative numbers in a medieval Islamic text. He is also credited with compiling the tables of sines and tangents at 15 ' intervals. Read more on Wikipedia

Abu al-Wafa' Buzjani was a mathematician and astronomer who was most famous for his tables of trigonometric functions.

Among people born in 940, Abu al-Wafa' Buzjani ranks 3. Before him are Hugh Capet and Ferdowsi. After him are Eadwig, Mieszko I of Poland, Géza, Grand Prince of the Hungarians, Leopold I, Margrave of Austria, Abu-Mahmud Khojandi, Doubravka of Bohemia, Baldwin III, Count of Flanders, Henry III, Duke of Bavaria, and Abū Sahl al-Qūhī. Among people deceased in 998, Abu al-Wafa' Buzjani ranks 1. After him are Sigfried, Count of the Ardennes and Koppány.

Among MATHEMATICIANS In Iran