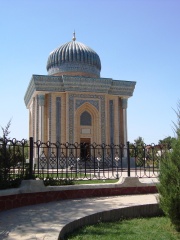 Abū Manṣūr Muḥammad b. Muḥammad b. Maḥmūd as-Samarḳandī al-ḥanafi (Persian: أبو منصور محمد بن محمد بن محمود الماتریدي السمرقندي الحنفي; 853–944 CE), often referred to as Abū Manṣūr al-Māturīdī for short, or reverently as Imam Māturīdī by Sunni Muslims, was a Sunni Hanafi jurist, theologian, and scriptural exegete from ninth-century Samarkand who became the eponymous codifier of one of the principal orthodox schools of Sunni theology, the Maturidi school, which became the dominant theological school for Sunni Muslims in Central Asia and later enjoyed a preeminent status as the school of choice for both the Ottoman Empire and the Mughal Empire.He was from a place called Maturid in Samarqand (Uzbekistan), and was known as Shaykh al-Islam, and the "Imam of Guidance" (Imam al-Huda). Read more on Wikipedia

Among religious figures, Abu Mansur al-Maturidi ranks 424 out of 2,272. Before him are Peter the Hermit, Pope Stephen I, Michael I Cerularius, Gregory the Illuminator, Saint Sava, and Pope John V. After him are Alphonsus Liguori, Dionysius the Areopagite, Pope Eleutherius, Margaret Mary Alacoque, Pope John XI, and Camillus de Lellis.

Among RELIGIOUS FIGURES In Uzbekistan

Among religious figures born in Uzbekistan, Abu Mansur al-Maturidi ranks 3. Before him are Muhammad al-Bukhari (810) and Al-Tirmidhi (824). After him are Baha-ud-Din Naqshband Bukhari (1327).