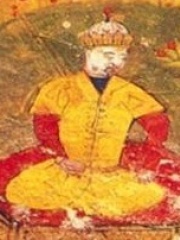 Abu'l-Khayr Khan (Uzbek: Abulxayirxon) (1412–1468) was a Khan of the Uzbek Khanate which united the nomadic Central Asian tribes. He created one of the largest and most powerful Turkic states during the period of 15th century. The Uzbek Khanate weakened in the decades following his death in 1468. Read more on Wikipedia

Abu'l-Khayr Khan was a Muslim scholar who was born in India and lived in Iran. He is most famous for his work on the Qur'an and Islamic law.

Among politicians, Abu'l-Khayr Khan ranks 3,852 out of 15,710. Before him are John IV of Trebizond, Arnulf, Duke of Bavaria, Francis V, Duke of Modena, Augustus, Elector of Saxony, Felix Kersten, and Giovanni il Popolano. After him are Suleiman ibn Qutulmish, Raymond of Poitiers, Margot Honecker, Ulrich von Jungingen, Anitta, and Kim Tu-bong.

Among people born in 1412, Abu'l-Khayr Khan ranks 3. Before him are Joan of Arc and Frederick II, Elector of Saxony. After him are Ludovico III Gonzaga, Marquis of Mantua and Jaume Huguet. Among people deceased in 1468, Abu'l-Khayr Khan ranks 6. Before him are Johannes Gutenberg, Skanderbeg, Sejo of Joseon, Jean de Dunois, and Juana Enríquez. After him are Sigismondo Pandolfo Malatesta, Bianca Maria Visconti, Alfonso, Prince of Asturias, Francesco Squarcione, and Zara Yaqob.