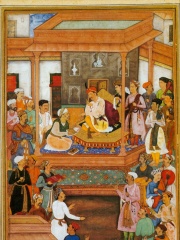 Abu'l-Fazl ibn Mubarak, also known as Abul Fazl, Abu'l Fadl and Abu'l-Fadl 'Allami (14 January 1551 – 22 August 1602), was the grand vizier of the Mughal emperor Akbar, from his appointment in 1579 until his death in 1602. He was the author of the Akbarnama, the official history of Akbar's reign in three volumes, (the third volume is known as the Ain-i-Akbari) and a Persian translation of the Bible. Read more on Wikipedia

Among people born in 1551, Abu'l-Fazl ibn Mubarak ranks 4. Before him are Henry III of France, Giulio Caccini, and Maria Anna of Bavaria. After him are Fausto Veranzio, Ğazı II Giray, Giovanni I Cornaro, William Camden, Robert Peake the Elder, and John Speed. Among people deceased in 1602, Abu'l-Fazl ibn Mubarak ranks 4. Before him are Agostino Carracci, Giacomo della Porta, and Renata of Lorraine. After him are Emilio de' Cavalieri, Ii Naomasa, Li Zhi, Friedrich Wilhelm I, Duke of Saxe-Weimar, Kanijeli Siyavuş Pasha, Catherine of Brandenburg-Küstrin, Caspar Peucer, and Juan de Fuca.