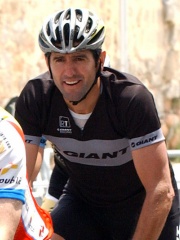 Abraham Olano Manzano (born January 22, 1970, in Anoeta, Gipuzkoa) is a Spanish retired professional road racing cyclist, who raced between 1992 and 2002. He won the World Road Championship in 1995, and the World Time Trial Championship in 1998, becoming the first and so far only male cyclist to win both.He also achieved distinction in Grand Tours: he won Vuelta a España in 1998 and was second in 1995, made it twice to the final podium at Giro d'Italia (third in 1996 and second in 2001), and placed three times in the top-ten at Tour de France, with the fourth place in 1997 as his personal best. Read more on Wikipedia

Among CYCLISTS In Spain