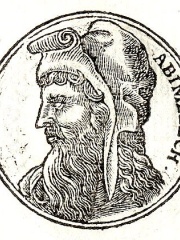 Abimelech (; אֲבִימֶלֶךְ ’Ǎḇīmeleḵ) was the king of Shechem and a son of biblical judge Gideon. His name can best be interpreted as "my father is king", claiming the inherited right to rule. He is introduced in Judges 8:31 as the son of Gideon and his Shechemite concubine, and the biblical account of his reign is described in chapter nine of the Book of Judges. Read more on Wikipedia

Abimelech is most famous for killing his own father to take the throne.

Page views of Abimeleches by language

Among politicians, Abimelech ranks 3,400 out of 15,577. Before him are Charles VII of Sweden, Hugh of Italy, Margaret of France, Duchess of Berry, Louis, Prince Napoléon, Constantine Bodin, and Suppiluliuma II. After him are Devlet I Giray, Patricio Aylwin, Dadabhai Naoroji, Leopold I, Margrave of Austria, Mammad Amin Rasulzadeh, and Julia Soaemias.