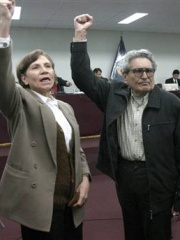 Manuel Rubén Abimael Guzmán Reynoso (American Spanish: [maˈnwel ruˈβen aβimaˈel ɡuzˈman rejˈnoso]; born 3 December 1934), also known by the nom de guerre Chairman Gonzalo (Spanish: Presidente Gonzalo), is a Peruvian Maoist, the former leader of the Shining Path during the Maoist insurgency known as the internal conflict in Peru. He was captured by the Peruvian government in September 1992 and sentenced to life imprisonment for terrorism and treason. In the 1960s and 1970s, Guzmán was a professor of philosophy active in left-wing politics and strongly influenced by Marxism and Maoism. Read more on Wikipedia

Among SOCIAL ACTIVISTS In Peru

Among social activists born in Peru, Abimael Guzmán ranks 3. Before him are Túpac Amaru II (1738) and Hilda Gadea (1925).