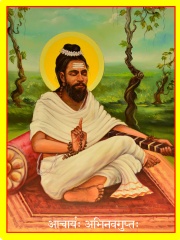 Abhinavagupta (c. 950 – 1016 CE: 27 ) was a philosopher, mystic and aesthetician from Kashmir. He was also considered an influential musician, poet, dramatist, exegete, theologian, and logician – a polymathic personality who exercised strong influences on Indian culture.Abhinavagupta was born in a Kashmiri Brahmin family of scholars and mystics and studied all the schools of philosophy and art of his time under the guidance of as many as fifteen (or more) teachers and gurus.: 35  In his long life he completed over 35 works, the largest and most famous of which is Tantrāloka, an encyclopedic treatise on all the philosophical and practical aspects of Kaula and Trika (known today as Kashmir Shaivism). Read more on Wikipedia

Page views of Abhinavaguptas by language

Among philosophers, Abhinavagupta ranks 727 out of 1,089. Before him are Albert of Saxony, Luigi Guido Grandi, Donald Davidson, Hecataeus of Abdera, Kitaro Nishida, and Calcidius. After him are Jan Mukařovský, Frithjof Schuon, Peter the Iberian, Perry Anderson, Hakuin Ekaku, and Crates of Athens.

Among people born in 950, Abhinavagupta ranks 10. Before him are Ibn Yunus, Leo the Deacon, Maslama al-Majriti, Boleslaus III, Duke of Bohemia, Bernard I, Duke of Saxony, and Olof Björnsson. After him are Sarolt, Mariam al-Asturlabi, William I of Provence, Urraca Fernández, Thorvald Asvaldsson, and Otto III, Duke of Swabia. Among people deceased in 1020, Abhinavagupta ranks 3. Before him are Leif Erikson and Ferdowsi. After him are Gagik I of Armenia, Manuel Erotikos Komnenos, Melus of Bari, Al-Sijzi, Malusha, and Ælfric of Eynsham.