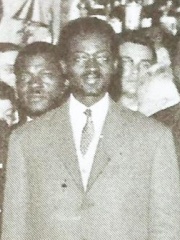 Abel Nguéndé Goumba (French pronunciation: ​[abɛl gumba]; 18 September 1926 – 11 May 2009) was a Central African political figure. During the late 1950s, he headed the government in the period prior to independence from France, and following independence he was an unsuccessful candidate for President of the Central African Republic four times (1981, 1993, 1999, and 2005). Goumba, who was President of the Patriotic Front for Progress (FPP) political party, served under President François Bozizé as Prime Minister from March 2003 to December 2003 and then as Vice President from December 2003 to March 2005. Read more on Wikipedia

Since 2007, the English Wikipedia page of Abel Goumba has received more than 21,355 page views. His biography is available in 15 different languages on Wikipedia making him the 11,692nd most popular politician.