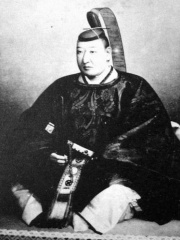 Abe Masahiro (阿部 正弘, December 3, 1819 – August 6, 1857) was the chief senior councillor (rōjū) in the Tokugawa shogunate of Bakumatsu period Japan at the time of the arrival of Commodore Matthew Perry on his mission to open Japan to the outside world. Abe was instrumental in the eventual signing of the Convention of Kanagawa in 1854. Abe did not sign the treaty himself or participate in the negotiations in person; this was done by his plenipotentiary Hayashi Akira. Read more on Wikipedia

Since 2007, the English Wikipedia page of Abe Masahiro has received more than 36,261 page views. His biography is available in 18 different languages on Wikipedia making him the 9,830th most popular politician.