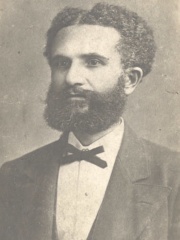 Abdyl Dume bey Frashëri (Turkish: Fraşerli Abdül Bey; 1 June 1839 – 23 October 1892) was an Ottoman Albanian civil servant, politician of the Ottoman Empire and one of the first Albanian political ideologues of the Albanian National Awakening. During his lifetime Frashëri endeavoured to instill among Albanians patriotism and a strong identity while promoting a reform program based on Albanian language education and literature.He was one of the initiators and a prominent leader of the League of Prizren. He distinguished himself as a political personality from the 1860s through early political assignments. Read more on Wikipedia

Among politicians, Abdyl Frashëri ranks 10,372 out of 15,710. Before him are King Lie of Zhou, Marcus Valerius Volusus, Ian Paisley, John Boland, Jorge Pacheco Areco, and Sanghamitta. After him are Matthew Hopkins, Augusto B. Leguía, Francesco Dandolo, Jean Béliveau, Leonardo III Tocco, and Marduk-nadin-ahhe.