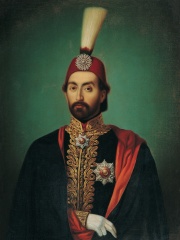 Abdulmejid I (Ottoman Turkish: عبد المجيد اول‎, romanized: Abdülmecîd-i evvel, Turkish: Birinci Abdülmecid; 25 April 1823 – 25 June 1861), was the 31st Sultan of the Ottoman Empire and succeeded his father Mahmud II on 2 July 1839. His reign was notable for the rise of nationalist movements within the empire's territories. Read more on Wikipedia

Abdulmejid I was the Sultan of the Ottoman Empire from 1839 to 1861. He is most famous for being the first sultan to live in the newly constructed Dolmabahçe Palace, which he commissioned.

Page views of Abdulmejid IS by language

Among politicians, Abdulmejid I ranks 363 out of 15,710. Before him are Park Chung-hee, Philip III of Spain, Francis II, Holy Roman Emperor, Horemheb, Dido, and Gustaf VI Adolf of Sweden. After him are Abbas the Great, Sargon of Akkad, Joachim Murat, Ertuğrul, Alp Arslan, and Sigismund III Vasa.