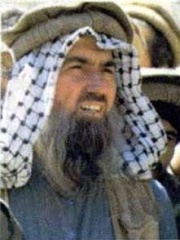 Abdullah Yusuf Azzam (Arabic: عبد الله يوسف عزام‎, ‘Abdu’llāh Yūsuf ‘Azzām; 1941 – 24 November 1989) was a Palestinian Sunni Islamic scholar and theologian and an influential Salafist jihadist. Azzam preached defensive jihad by Muslims to help the Afghan mujahideen against the Soviet invaders.Azzam was a teacher and mentor of Osama bin Laden and persuaded bin Laden to come to Afghanistan and help the jihad. Together they cofounded the Maktab al-Khidamat in order to recruit foreign volunteers for the war. Read more on Wikipedia

Abdullah Yusuf Azzam is most famous for being the mentor of Osama bin Laden and co-founder of the Muslim World League.

Among politicians, Abdullah Yusuf Azzam ranks 2,711 out of 15,710. Before him are Stanley Baldwin, Vsevolod Meyerhold, Amyntas III of Macedon, Anne of France, Eliot Ness, and Sweyn III of Denmark. After him are Friedrich Ludwig Jahn, Huáscar, Stefan Dečanski, Christine of France, Erich Mielke, and Alfonso III of Aragon.