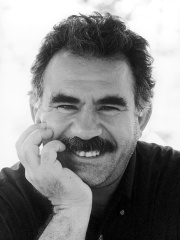 Abdullah Öcalan ( OH-jə-lahn; Turkish: [œdʒaɫan]; born 4 April 1949), also known as Apo (short for both Abdullah and "uncle" in Kurdish), is a Kurdish leftist political theoretician, political prisoner and one of the founding members of the militant Kurdistan Workers' Party (PKK).Öcalan helped found the PKK in 1978, and led it into the Kurdish-Turkish conflict in 1984. His leadership style was often ruthless, and many of his opponents in the PKK were killed on his orders. Read more on Wikipedia

Since 2007, the English Wikipedia page of Abdullah Öcalan has received more than 990,644 page views. His biography is available in 53 different languages on Wikipedia making him the 16th most popular extremist.

Among extremists, Abdullah Öcalan ranks 16 out of 182. Before him are Lee Harvey Oswald, Andrei Chikatilo, Ulrike Meinhof, Ramón Mercader, Ed Gein, and Man in the Iron Mask. After him are Abu Bakr al-Baghdadi, Albert Fish, Ted Kaczynski, Carlos the Jackal, Zodiac Killer, and Cleon.

Among EXTREMISTS In Turkey

Among extremists born in Turkey, Abdullah Öcalan ranks 2. Before him are Herostratus (-301). After him are Mehmet Ali Ağca (1958).