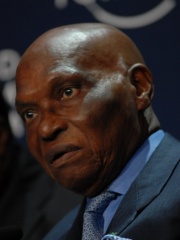 Abdoulaye Wade (born May 29, 1926) is a Senegalese politician who was President of Senegal from 2000 to 2012. He is also the Secretary-General of the Senegalese Democratic Party (PDS), having led the party since it was founded in 1974. A long-time opposition leader, he ran for President four times, beginning in 1978, before he was elected in 2000. Read more on Wikipedia

Among politicians, Abdoulaye Wade ranks 3,548 out of 15,710. Before him are Teos of Egypt, Maharana Pratap, Seth-Peribsen, Artur Rasizade, Shalmaneser V, and Alexander Karađorđević, Prince of Serbia. After him are Charles of Provence, Yolanda of Flanders, Rudolf Schuster, Yoshirō Mori, Aybak, and Joseph Wirth.

Among POLITICIANS In Senegal