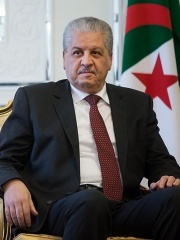 Abdelmalek Sellal (Arabic: عبد المالك سلال, romanized: ʿAbd al-Mālik Silāl; born 1 August 1948) is an Algerian politician who was Prime Minister of Algeria from 3 September 2012 to 13 March 2014 when he took a leave of office to support President Abdelaziz Bouteflika's re-election campaign and again from April 2014 to May 2017. Read more on Wikipedia

Among politicians, Abdelmalek Sellal ranks 10,241 out of 15,577. Before him are John Kufuor, Keiichi Tsuchiya, Prince Hisaaki, Abdyl Frashëri, Giovanni I Participazio, and Ashikaga Yoshiharu. After him are Afonso Pena, Titus Manlius Torquatus, Gabriel Almond, Alexander I of Georgia, Luigi Luzzatti, and Andrew Moray.