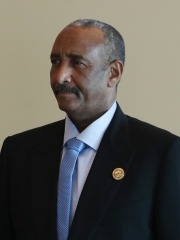 General Abdel Fattah Abdelrahman al-Burhan (Arabic: عبد الفتاح عبد الرحمن البرهان‎; born 1960) is a Sudanese politician and Sudanese Army general who is currently serving as Chairman of the Sovereignty Council of Sudan, the country's collective transitional head of state. Before assuming this role in August 2019, he was the de facto head of state of Sudan as Chairman of the Transitional Military Council after former Chairman Ahmed Awad Ibn Auf resigned and transferred control in April 2019.Additionally, the recently signed Juba agreement allows Lt. General Al-Burhan to continue to lead the SC for another 20 months, rather than stepping down as planned in February 2021.He was formerly the General Inspector of the Sudanese Armed Forces.Burhan's record is considered to be cleaner than that of most of Sudan's generals, and he met with protesters during the Sudanese Revolution to listen to their demands.In May 2019, Burhan's first international trip was to Egypt to meet Abdel Fattah el-Sisi. Read more on Wikipedia

Among politicians, Abdel Fattah al-Burhan ranks 8,789 out of 15,710. Before him are Laches, Wilhelm von Mirbach, Patriarch Sergius of Moscow, Louis VII, Duke of Bavaria, García Galíndez, and Princess Joséphine Caroline of Belgium. After him are Li Zhanshu, Sadiq Khan, Ekkathat, Leo I, Prince of Armenia, José Batlle y Ordóñez, and Bobby Sands.

Others born in Sudan

Among POLITICIANS In Sudan