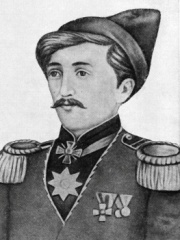 Abbasgulu Bakikhanov (Azerbaijani: Abbasqulu ağa Bakıxanov Qüdsi) (21 June 1794, Amirjan – 31 May 1847, Wadi Fatima, near Jeddah), Abbas Qoli Bakikhanov, or Abbas-Qoli ibn Mirza Mohammad (Taghi) Khan Badkubi was an Azerbaijani writer, historian, journalist, linguist, poet and philosopher. He was son of the third khan of Baku Mirza Muhammad Khan II. He later served as an officer in the Imperial Russian Army and participated in the Russo-Persian War of 1826-1828. Read more on Wikipedia

Since 2007, the English Wikipedia page of Abbasgulu Bakikhanov has received more than 29,545 page views. His biography is available in 15 different languages on Wikipedia making him the 2,521st most popular writer.