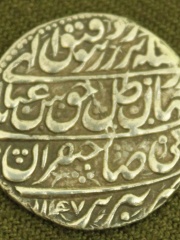 Abbas III (January 1732 – February 1740) (Persian: شاه عباس سوم) was a son of Shah Tahmasp II and Shahpari Begum of the Safavid dynasty and reigned from 1732 to 1736. After the deposition of his father by Nader Khan (the future Nader Shah) the infant Abbas was appointed nominal ruler of Iran on 7 September 1732. Nader Khan, who was the real ruler of the country, assumed the positions of deputy of state and viceroy. Read more on Wikipedia

Abbas III was a powerful ruler of Persia. He is most famous for being the last Safavid ruler.

Among politicians, Abbas III ranks 3,101 out of 15,577. Before him are Magnus I of Sweden, Casimir I the Restorer, Lydia Litvyak, Abdul Salam Arif, Pelopidas, and Princess Louise of Prussia. After him are Ferdinand Čatloš, Clotilde of France, Sophonisba, Frederick I, Duke of Swabia, Léon Bourgeois, and Prince Pierre, Duke of Valentinois.