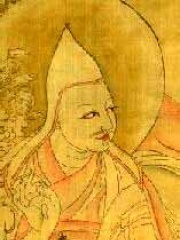 Ngawang Lobsang Gyatso (Tibetan: ངག་དབང་བློ་བཟང་རྒྱ་མཚོ་, Wylie: Ngag-dbang blo-bzang rgya-mtsho; Tibetan pronunciation: [ŋɑ̀wɑ̀ŋ lɔ́psɑ̀ŋ cɑ̀t͡só]; 1617–1682) was the 5th Dalai Lama and the first Dalai Lama to wield effective temporal and spiritual power over all Tibet. He is often referred to simply as the Great Fifth, being a key religious and temporal leader of Tibetan Buddhism and Tibet. Gyatso is credited with unifying all Tibet under the Ganden Phodrang after a Mongol military intervention which ended a protracted era of civil wars. Read more on Wikipedia

The 5th Dalai Lama, Lobsang Gyatso, is most famous for his role in the Tibetan Buddhist world. He became the Dalai Lama at the age of 5, and was a major proponent of Buddhism.

Among politicians, 5th Dalai Lama ranks 989 out of 15,577. Before him are Baldwin I of Jerusalem, Mohammed Daoud Khan, Bolesław I the Brave, Ulrika Eleonora, Queen of Sweden, Zoë Porphyrogenita, and Phocas. After him are Muhammad II of Khwarazm, Clement Attlee, George II of Greece, Josep Borrell, Alauddin Khalji, and Leo VI the Wise.