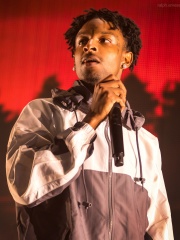 Shéyaa Bin Abraham-Joseph (born October 22, 1992), better known by his stage name 21 Savage, is a rapper, songwriter, and record producer. Born in London, England, he was brought to Atlanta, Georgia, by his mother at the age of seven. He became known in Atlanta for the 2015 mixtape The Slaughter Tape before attaining nationwide attention following an EP collaboration Savage Mode (2016) with the producer Metro Boomin and its popular singles "X" and "No Heart," as well as guest features on the 2016 Drake single "Sneakin'" and the 2017 Post Malone chart-topping single, "Rockstar."His debut studio album, Issa Album (2017), peaked at number two on the US Billboard 200 and gave him his first top 20 single on the Billboard Hot 100, "Bank Account." Later that year, he collaborated with Offset and Metro Boomin for the album Without Warning (2017). Read more on Wikipedia

Since 2007, the English Wikipedia page of 21 Savage has received more than 12,596,131 page views. His biography is available in 29 different languages on Wikipedia. 21 Savage is the 2,502nd most popular singer, the 5,441st most popular biography from United Kingdom and the 238th most popular British Singer.

Page views of 21 Savages by language

Among singers, 21 Savage ranks 2,502 out of 3,541. Before him are Hozier, Keny Arkana, Elena Temnikova, Sibel Tüzün, İzel, and L. After him are Akeboshi, Natsumi Abe, Stefano Secco, Amber Liu, Necro, and Magdalena Tul.