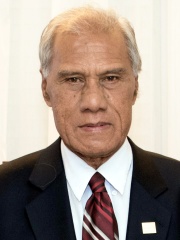 Samiuela ʻAkilisi Pōhiva (7 April 1941 – 12 September 2019) was a Tongan pro-democracy activist and politician. Pohiva, the leader of the Democratic Party of the Friendly Islands (DPFI), served as the Prime Minister of Tonga from 2014 to his death in 2019. Read more on Wikipedia

Since 2007, the English Wikipedia page of ʻAkilisi Pōhiva has received more than 145,108 page views. His biography is available in 17 different languages on Wikipedia making him the 12,343rd most popular politician.

Among politicians, ʻAkilisi Pōhiva ranks 12,243 out of 14,801. Before him are Serik Akhmetov, Agnimitra, Sucheta Kriplani, Hailemariam Desalegn, Rustam Minnikhanov, and Marian Lupu. After him are Sumitra Mahajan, Robert A. Taft, Joseph Nérette, Shu-turul, Andreas Michalakopoulos, and Federico Errázuriz Zañartu.

Others born in Tonga

Among POLITICIANS In Tonga