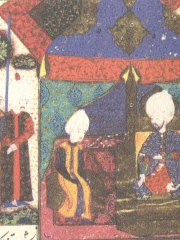 Şehzade Bayezid (Ottoman Turkish: شهزاده بايزيد‎; 1525 – 25 September 1561) was an Ottoman prince as the son of Sultan Suleiman the Magnificent and his legal wife Hurrem Sultan. After the execution of Şehzade Mustafa (who had been the heir apparent to the Ottoman throne) in 1553, Bayezid became the popular heir among the army. Throughout the 1550s, when Suleiman was already in his 60s, a protracted competition for the throne between Bayezid and his brother Selim became evident. Read more on Wikipedia

Since 2007, the English Wikipedia page of Şehzade Bayezid has received more than 634,292 page views. His biography is available in 31 different languages on Wikipedia making him the 416th most popular politician.

Among politicians, Şehzade Bayezid ranks 412 out of 14,801. Before him are Neville Chamberlain, Theodosius II, Henry the Fowler, Louis X of France, Musa I of Mali, and Imre Nagy. After him are Yongle Emperor, Xanthippe, Charles III of Spain, Frederick III, German Emperor, Matthias, Holy Roman Emperor, and Hugo Chávez.