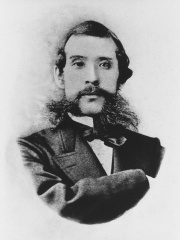 Ōkubo Toshimichi (大久保 利通, 26 September 1830 – 14 May 1878) was a Japanese statesman and one of the Three Great Nobles regarded as the main founders of modern Japan. Ōkubo was a samurai of the Satsuma Domain and joined the movement to overthrow the ruling Tokugawa Shogunate during the Bakumatsu period. Upon the founding of the new Empire of Japan, Ōkubo became a leading member of the Meiji Restoration and a prominent member of the Meiji oligarchy. Read more on Wikipedia

Since 2007, the English Wikipedia page of Ōkubo Toshimichi has received more than 183,215 page views. His biography is available in 35 different languages on Wikipedia making him the 3,455th most popular politician.

Among politicians, Ōkubo Toshimichi ranks 3,433 out of 14,801. Before him are Johann I Joseph, Prince of Liechtenstein, Louis I, Duke of Bavaria, George Papandreou, Kusunoki Masashige, Vojtech Tuka, and Allen Dulles. After him are Emperor Go-Hanazono, Coluccio Salutati, Mohamed Ghannouchi, Archduchess Maria Anna of Austria, Philetaerus, and Lütfi Pasha.