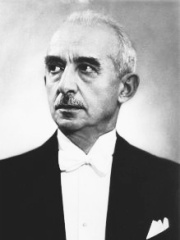 Mustafa İsmet İnönü (Turkish pronunciation: [isˈmet ˈinœny]; 24 September 1884 – 25 December 1973) was a Turkish general and statesman, who served as the second President of Turkey from 11 November 1938 to 22 May 1950, when his Republican People's Party was defeated in Turkey's second free elections. He also served as the first Chief of the General Staff from 1922 to 1924, and as the first Prime Minister after the declaration of the Republic, serving three terms: from 1923 to 1924, 1925 to 1937, and 1961 to 1965. As President, he was granted the official title of "Millî Şef" (National Chief).When the 1934 Surname Law was adopted, Mustafa Kemal gave him a surname taken from İnönü, where he commanded the forces of Army of Grand National Assembly as the Minister of the Chief of the General Staff (Turkish: Erkân-ı Harbiye-i Umumiye Reis Vekili) during the Greco-Turkish War of 1919–1922. Read more on Wikipedia

Among politicians, İsmet İnönü ranks 815 out of 15,710. Before him are Mary, Queen of Hungary, Charles II of England, Frederick VIII of Denmark, Wilhelm Frick, Johann Friedrich Struensee, and Xiang Yu. After him are Sigismund II Augustus, Eric Bloodaxe, Irma Grese, Vajiralongkorn, Constans II, and Liu Shaoqi.