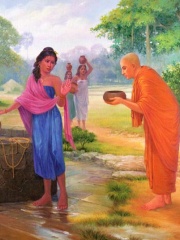 Ānanda (5th–4th century BCE) was the primary attendant of the Buddha and one of his ten principal disciples. Among the Buddha's many disciples, Ānanda stood out for having the best memory. Most of the texts of the early Buddhist Sutta-Piṭaka (Pāli; Sanskrit: Sūtra-Piṭaka) are attributed to his recollection of the Buddha's teachings during the First Buddhist Council. Read more on Wikipedia

Since 2007, the English Wikipedia page of Ānanda has received more than 125,797 page views. His biography is available in 44 different languages on Wikipedia making him the 198th most popular religious figure.

Page views of Ānandas by language

Among people born in 600 BC, Ānanda ranks 7. Before him are Cyrus the Great, Lucius Tarquinius Superbus, Esther, Lucretia, Peisistratos, and Servius Tullius. After him are Tomyris, Belshazzar, Polycrates, Alexander I of Macedon, Lucius Junius Brutus, and Cambyses I. Among people deceased in 500 BC, Ānanda ranks 3. Before him are Esther and Myron. After him are Polykleitos, Leucippus, Artemisia I of Caria, Hippasus, Rāhula, Gorgo, Queen of Sparta, Obadiah, Amestris, and Polygnotus.