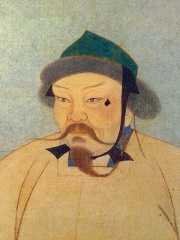 Ögedei (also Ogodei; Mongolian: Өгэдэй, romanized: Ögedei, Mongolian: ᠥᠭᠡᠳᠡᠢ Ögedei, ᠥᠭᠦᠳᠡᠢ Ögüdei; Chinese: 窩闊台; c. 1186 – 11 December 1241) was the third son of Genghis Khan and second Great Khan of the Mongol Empire, succeeding his father. He continued the expansion of the empire that his father had begun, and was a world figure when the Mongol Empire reached its farthest extent west and south during the Mongol invasions of Europe and East Asia. Read more on Wikipedia

Ögedei Khan is most famous for being the third son of Genghis Khan, and for his conquests in Central Asia.

Among politicians, Ögedei Khan ranks 705 out of 15,710. Before him are Gallienus, Saparmurat Niyazov, Robert II of France, Lucius Tarquinius Priscus, Afonso I of Portugal, and Heydar Aliyev. After him are Malik-Shah I, Vytautas, Mary of Hungary, Konstantin von Neurath, Ahmose I, and Manuel II Palaiologos.

Among people born in 1185, Ögedei Khan ranks 2. Before him is Pope Urban IV. After him are Shams Tabrizi, Afonso II of Portugal, William III of Sicily, Inge II of Norway, Thomas of Celano, Gertrude of Merania, Töregene Khatun, Hyacinth of Poland, Michael of Chernigov, and Konstantin of Rostov. Among people deceased in 1241, Ögedei Khan ranks 3. Before him are Pope Gregory IX and Snorri Sturluson. After him are Pope Celestine IV, Valdemar II of Denmark, Ivan Asen II of Bulgaria, Henry II the Pious, Isabella of England, Irene Laskarina, Fujiwara no Teika, Amaury de Montfort, and Eleanor, Fair Maid of Brittany.