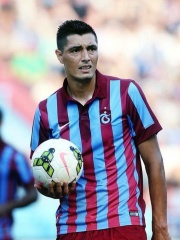 Óscar René Cardozo Marín (Spanish pronunciation: [ˈoskaɾ reˈne kaɾˈðoso maˈɾin]; born 20 May 1983) is a Paraguayan professional footballer who plays as a striker for Club Libertad and the Paraguay national team. Known for his powerful left-foot shot and free-kick skills, he first gained attention whilst playing for Newell's Old Boys, which led to a move to Benfica in 2007. He scored nearly 200 official goals for the Portuguese club and won eight major titles, including the 2010 national championship, where he also was the top scorer, and the domestic treble in the 2013–14 season. Read more on Wikipedia

Since 2007, the English Wikipedia page of Óscar Cardozo has received more than 564,349 page views. His biography is available in 41 different languages on Wikipedia making him the 1,830th most popular soccer player.