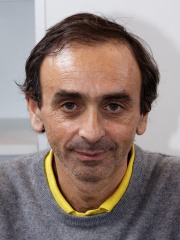 Éric Justin Léon Zemmour (born 31 August 1958) is a French essayist, political journalist and writer of Algerian origin. His anti-liberal and anti-immigration positions are notorious in his homeland, as well as the numerous controversies he has been involved in. With the publication of The French Suicide (French: Le Suicide français) in 2014, a book for which he was awarded the Prix Combourg-Chateaubriand the following year, he gained popularity outside of France. Read more on Wikipedia

Since 2007, the English Wikipedia page of Éric Zemmour has received more than 239,074 page views. His biography is available in 16 different languages on Wikipedia making him the 4,217th most popular writer.