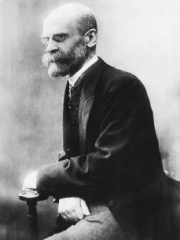 David Émile Durkheim (French: [emil dyʁkɛm] or [dyʁkajm]; 15 April 1858 – 15 November 1917) was a French sociologist. He formally established the academic discipline of sociology and, with Max Weber, is commonly cited as the principal architect of modern social science.From his lifetime, much of Durkheim's work would be concerned with how societies could maintain their integrity and coherence in modernity, an era in which traditional social and religious ties are no longer assumed, and in which new social institutions have come into being. Durkheim asserted the sociology is unique from other disciplines such as, psychology; because of its large scale nature. Read more on Wikipedia

Émile Durkheim is most famous for his theory of the division of labor, which is the idea that as a society becomes more complex, its people specialize in certain tasks.

Among SOCIOLOGISTS In France