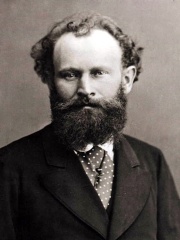 Édouard Manet (UK: , US: , French: [edwaʁ manɛ]; 23 January 1832 – 30 April 1883) was a French modernist painter. He was one of the first 19th-century artists to paint modern life, and a pivotal figure in the transition from Realism to Impressionism. Born into an upper-class household with strong political connections, Manet rejected the future originally envisioned for him, and became engrossed in the world of painting. Read more on Wikipedia

Since 2007, the English Wikipedia page of Édouard Manet has received more than 1,912,637 page views. His biography is available in 90 different languages on Wikipedia making him the 26th most popular painter.

Among painters, Édouard Manet ranks 26 out of 1,258. Before him are Titian, Gustav Klimt, Donatello, Pieter Bruegel the Elder, El Greco, and Hieronymus Bosch. After him are Pierre-Auguste Renoir, Wassily Kandinsky, Piet Mondrian, Eugène Delacroix, Jean-Auguste-Dominique Ingres, and Jan van Eyck.