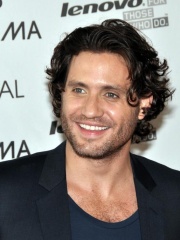 Édgar Filiberto Ramírez Arellano (Spanish pronunciation: [ˈeðɣaɾ raˈmiɾes], born March 25, 1977) is a Venezuelan actor and former journalist. He played Carlos the Jackal in the 2010 French-German biopic series Carlos, a role for which he won the César Award for Most Promising Actor at the César Awards 2011, and was nominated for a Golden Globe and Emmy Award for Best Actor. He also played Larry, a CIA operative in the film Zero Dark Thirty, Paz—a CIA assassin—in The Bourne Ultimatum, and Roberto Durán, a four-time world-champion boxer and member of the International Boxing Hall of Fame, in Hands of Stone. Read more on Wikipedia

Since 2007, the English Wikipedia page of Édgar Ramírez has received more than 4,850,530 page views. His biography is available in 22 different languages on Wikipedia making him the 5,504th most popular actor.

Among ACTORS In Venezuela