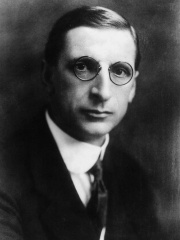 Éamon de Valera ( AY-mən DEV-ə-LAIR-ə, -⁠LEER-, Irish: [ˈeːmˠən̪ˠ dʲɛ ˈvˠalʲəɾʲə]; first registered as George de Valero; changed some time before 1901 to Edward de Valera; 14 October 1882 – 29 August 1975) was a prominent statesman and political leader in 20th-century Ireland, serving several terms as head of government and head of state, with a prominent role introducing the Constitution of Ireland.Prior to de Valera's political career, he was a commandant at Boland's Mill during the 1916 Easter Rising. He was arrested, sentenced to death but released for a variety of reasons, including the public response to the British execution of Rising leaders. He returned to Ireland after being jailed in England and became one of the leading political figures of the War of Independence. Read more on Wikipedia

Since 2007, the English Wikipedia page of Éamon de Valera has received more than 2,040,576 page views. His biography is available in 63 different languages on Wikipedia making him the 3,100th most popular politician.