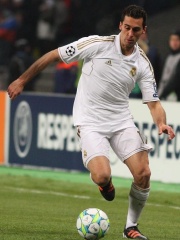 Álvaro Arbeloa Coca (Spanish pronunciation: [ˈalβaɾo aɾβeˈloa ˈkoka]; born 17 January 1983) is a Spanish retired footballer. He predominantly played as a right back, although he also occasionally played on the left side.He started his professional career with Real Madrid, playing mostly with the reserves. In 2006 he moved to Deportivo, joining Liverpool after half a season and going on to appear in 98 official matches over three Premier League seasons. Read more on Wikipedia

Since 2007, the English Wikipedia page of Álvaro Arbeloa has received more than 1,235,887 page views. His biography is available in 61 different languages on Wikipedia making him the 1,018th most popular soccer player.