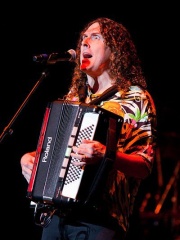 Alfred Matthew "Weird Al" Yankovic ( YANG-kə-vik; born October 23, 1959) is an American singer, musician, record producer, and actor who is known for humorous songs that make light of pop culture and often parody specific songs by contemporary musical acts. He also performs original songs that are style pastiches of the work of other acts, as well as polka medleys of several popular songs, most of which feature his trademark accordion. Since having a comedy song aired in 1976, Yankovic has sold more than 12 million albums (as of 2007), recorded more than 150 parody and original songs, and performed more than 1,000 live shows. His work has earned him five Grammy Awards and a further 11 nominations, four gold records, and six platinum records in the U.S. Read more on Wikipedia